The beginnings of higher technical education in Poznan date back to 1919, when the Supreme People's Council established the State Higher School of Mechanical Engineering. Regular classes, initially with a small number of students, began on September 1 that year. Unfortunately, before the first graduation ceremony took place, the school status was downgraded by removing the adjective "higher" out of its name. The School immediately began the efforts to restore its previous rank. 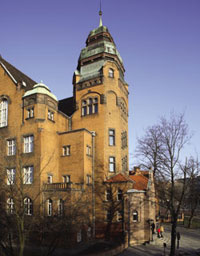 In 1921, in " Wiadomości Techniczne " [ ‘Technical News’ ] appeared the "Chronicle of the Establishment of  the University of Technology in Poznan" including justification for creating such an educational institution, the proposals of the performance plan concerning the necessary land, the building, the cost of its construction, equipment and operation of the university. The efforts  brought  success,   and operating since 1919, the State Higher School of Mechanical Engineering was renamed the State Higher School of Mechanical and Electrical Engineering, and in 1930 it was extended by the Faculty of Electrical Engineering.In this form the school operated until the outbreak of World War II, and 716 graduates received a degree from it.

In 1937, the Ministry formally approved the creation of the Poznań University of Technology, but World War II actually shattered those plans. After the war, the operation of School was resumed already in 1945, when it was transformed into the School of Engineering. At the same time, however, the efforts to establish a fully-fledged technical university in Poznan were continued. To do this, the Organising Committee of Poznan University of Technology was constituted, and a suitable memorial and a plan of action were formulated. Unfortunately, the lack of independent academic staff, the condition of the facilities and the lack of laboratory facilities allowed only for the appointment of the School of Engineering - higher vocational school, the non-academic educational institution with faculties: Mechanical Engineering, Electrical Engineering, and Civil Engineering. In this form the School continued until the mid-50s of the twentieth century. In 1953, in the new area at Piotrowo Street,  the building of the Faculty of Civil Engineering was erected. In September 1953, The Faculty of Agricultural Engineering was appointed. The University offered a really good atmosphere, the possibility to study in the Polish language was commonly appreciated , and the students proudly wore their claret-coloured caps with blue bands.

The breakthrough came in 1955 when the School of Engineering in Poznan, by the Ordinance of the Minister of Higher Education was transformed into Poznan University of Technology. It was a great joy for the whole, not only scientific, community of Poznan. In fact, it was only the beginning of efforts to give this institution the rank corresponding to the name. A new organizational structure was designed, under which the University acquired four faculties out of the already existing in the School of Engineering and all the inter-faculty units. A major change in the structure was in 1970 the introduction of the institute system: in place of the previous chairs, in each faculty two or three institutes were created. In 1968 the Faculty of Chemistry was created (now the Chemical Technology), in 1997 the Faculty of Technical Physics, in 1999, the Faculty of Architecture, in 2001 the Faculty of Computing and Management, and in 2006 the Faculty of Electronics and Telecommunications. 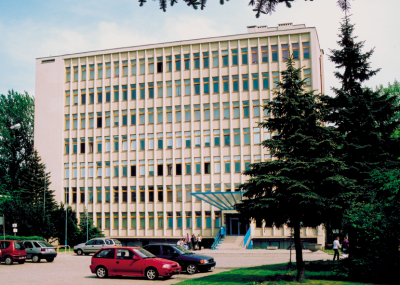 In 1995, PoznanUniversity of Technology as the first Polish technical university, became a member of the Conference of European Schools for Advanced Engineering Education and Research - CESAEER - an organization bringing together the best technical universities in Europe. In 2000, the first General Reunion of the Alumni of Poznan University of Technology was held, and in 2004 the University celebrated the 85th anniversary of the establishment of Polish Higher Technical Education in Poznan.